Immediately upon entering his second term as prime minster the Rt Hon David Cameron MP decided to unveil his great plan for the next 5 years. For some time he had been alarmed by the close proximity of foreign lands the other side of the English Channel.   During his first term, reports had filtered through of a Romanian scheme to begin fracking under the House of Lords.

According to the Daily Mail, the Romanians had developed a revolutionary system using top secret, communist technology, funded by benefit claims in Islington. They openly boasted that their fracking rods could pump top quality UK PLC gas out from under the mother of parliaments, all the way from Bucharest.

Enraged that honest, decent, hard working, god fearing, British voters could be diddled out of their hard earned fossil fuels the Prime Minister announced his plan to move all of Europe and Asia, significantly to the right.  This was to be done, not in any ideological, political way but in a very real physical sense, putting Britain out of reach of any underhanded Euro probing for good. 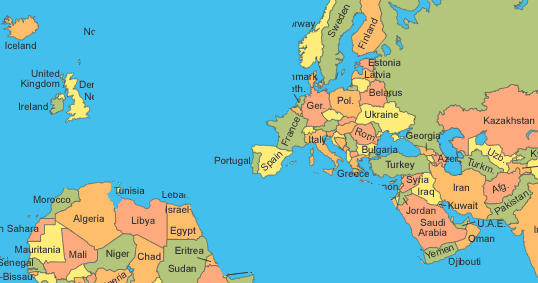 Artists impression of what it would definitely, probably look like if this sort of thing happened.

Plans for the HS2 link to Birmingham were put on hold while honest, decent, hard working, god fearing, British moat scientists got to work.  After three years they had found the forms for ordering paper clips and now there was nothing to stop them.

By the fifth year they had installed the “de-foreignator” at Dover and alerted the appropriate authorities. In the final year of the administration the nation awaited the result of the in-out EU referendum like a hedgehog waits for a speeding car.

It was tense.  When the result came through a jubilant David Cameron began filling out the forms for permission to use the de-foreignator and called a snap election. The nation rejoiced, reason had prevailed and they all lived happily ever after.

About Not So Great Dictator

I make films featuring Lego and other assorted creatures and historical figures. If you do not think they are all funny, then I am afraid there is something wrong with you. Seek medical attention.
View all posts by Not So Great Dictator →
This entry was posted in History and tagged David Cameron, EU, European Referendum, GE2015, history, humour, spoof. Bookmark the permalink.